The entire purpose – or at least a primary purpose – of a LIMS is the ability to rely on it as a central repository for ‘all things lab.’ However, the LIMS’ ability to serve as a lab’s informatics hub is only as good as its ability to speak with other instruments and systems.

There are many different types of instruments a lab manager might want to connect to the LIMS, and these are categorized as either ‘simple instruments’ or ‘complex instruments.’

A “simple” instrument is defined as one that uses a protocol such as RS-232. These:

Examples of such instruments include weight balances or pH meters.

Connecting with simple instruments should be…well…simple.

LabVantage has an out-of-the-box complete solution for connecting simple instruments, a functionality requiring no special licenses or software.

Complex instruments, on the other hand, typically return multiple results – potentially for multiple samples. They may also be interfaced bi-directionally, in order to receive worklists. Communication with complex instruments may occur either through files or via network interface (TCP/IP). Examples include chromatography systems, along with the software solutions that drive those instruments (e.g., Thermo Chromeleon or Agilent OpenLab.)

LIMS CI is based on the powerful Talend Open Studio ETL program. It interfaces with complex instruments via files or TCP/IP to send and receive data to and from the LIMS. The module uses ETL – Extract, Transform, and Load – an industry-standard initialism for software used to handle data that may be both complex and voluminous.

While instrument results are not typically considered Big Data, ETL software has both the power and throughput required for handling what could potentially be very large sets of instrument data.

Once the module is activated, LIMS CI is integrated directly into LabVantage and appears within the application as normal web pages for configuration and data management.

Ensure Your Audit Trail is Strong
The LIMS CI server can be installed on the LabVantage application tier or on a separate server, depending on your needs.

For instruments and software that write files, LIMS CI can access remote file systems to read and write instrument files and logs.

Many lab managers have concerns about the now-essential issue of audit trails, notifications and logs. LIMS CI addresses this in a number of ways to ensure your lab adheres to the highest standards of data integrity.

LIMS D.I.Y. Instrument Drivers for Instrument Interfacing
Our annual CTEC conference is a great source of learning not just for our customers, but for us as well. Some of the upgrades and platform changes we make to the LabVantage LIMS come about directly through our interaction with users.

One such feature is self-service instrument drivers.  Rather than LabVantage writing code for customer installations to parse complex instrument data, customers have long asked for the ability to create and modify their own drivers. LIMS CI enables customer to self-service even complex drivers!

Because Talend Open Studio is a free, open source ETL tool, anyone with knowledge of the tool can create LIMS CI drivers. And with over 200 drag-and-drop components to receive, transform, and load data, Open Studio is the optimal environment to parse and post instrument data.

Creating and deploying instrument drivers on a LIMS runs the gamut of difficulty. Some are easier to develop while others are not.

Drivers can be as simple as reading, mapping, and posting data. On the other hand, they can involve heavy data manipulation and executing queries against the LIMS to collect supplementary data before posting the data.

Complex instrument data is difficult to normalize and transform for use in LIMS. While this was more true historically than it is today, such integrations can still be tricky. The use of the Open Studio graphical interface goes a long way towards simplifying this task. 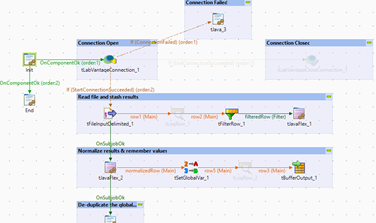 While developers and I.T. teams want the flexibility to develop even the most complex drivers, most users just want a seamless experience. LIMS CI was designed with usability & accessibility in mind, particularly for bi-directional instruments.

Once a driver has been developed, it can quickly be exported and placed on the LIMS CI server to be used by the LabVantage LIMS. The driver workflow is simple:

Whether you’d like to create your own LIMS instrument drivers or have LabVantage Professional Services create them for you, LIMS CI has the power to connect any instrument or software to your LabVantage system.