Killing Paper: How to Make the Most of Your ELN

Communication is key to all scientific research. It’s not something we spend a lot of time thinking about, but it’s undeniable. 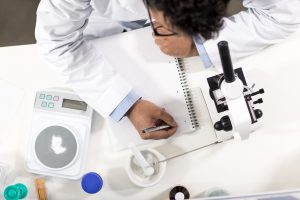 Although researchers and scientists primarily work alone, their work is critical to the greater scientific community. Their ideas, evidence, plans, findings and errors all need to be shared, proved, discussed and corrected.

Paper Lab Notebooks Transitioning to ELNs
In the modern scientific era – the last one hundred years or so – the paper laboratory notebook and its published equivalent, the scientific paper, have been central to scientific communication.

While paper lab notebooks once dominated, electronic lab notebooks have made significant gains in laboratories. But paper isn’t completely dead yet. (This article in Nature discusses the imminent demise of paper…which has been predicted since the 1990s, but has yet to happen.)

That is changing as a new generation of scientists enters the workplace – a generation which has grown up in a digital world and is far more comfortable using digital tools than paper ones.

Other factors have come into play, as well. The volumes of data today are much different than they were even as recently as the 1990s. Indeed, data volumes have increased exponentially since the mid-2000s.  What amounted to 0.16 zetabytes (ZB) in the mid-2000s, is projected to grow from 33ZB in 2018 to 175ZB by 2025. For many companies, these volumes are unmanageable manually – forcing the need for electronic solutions.

Beyond this profusion of massive datasets, electronic lab notebooks are now being seen as tools capable of streamlining compliance & securing datasets, while enabling collaboration, streamlining workflows and allowing functions not available in paper lab notebooks, such as searching.

The rise of the cloud, however, may prove to actually be the inflection point at which electronic lab notebooks finally overcome their paper counterparts.

Cloud-Based ELNs Deliver New Freedoms
Although not new (since desktop ELNs on the market are very mature), one clearly up-and-coming trend consists of Electronic Notebooks in the Web/Cloud in combination with LIMS functionality.

Web/Cloud ELNs are ushering in a new freedom in how we perform experiments, capture results, and prove findings. Removing the ELN from desktops benefits your researchers and scientists in many ways. Now, they can search, share, and work anytime and anywhere. They can stop in their tracks to capture an idea or test a theory on the spot.

Being freed from the constraints of an office setting or even a computer, the possibilities with web-based ELNs are endless. An ELN eliminates the need for manual transcription, and allows your team to work with distributed groups, all while keeping track of notes. An added (and critical) bonus is all scientific work is easily backed up and can be readily viewed by their peers and other members of the community.

Benefits of an ELN in a LIMS Environment
When working in combination with LIMS functionality, electronic lab notebooks support researchers throughout the entire lifecycle of an experiment. This is even more true when combined with an SDMS for storing raw instrument data. All lab instruments need to be captured, analyzed, and annotated within the lab notebook.

ELNs are also changing the way we capture a scientific record, transforming it from paper notebooks to their digital equivalent. See the chart below from the Journal of Cheminformatics for more details on exactly how a semantic notebook, ELN, and cloud ELN can enable your laboratory: 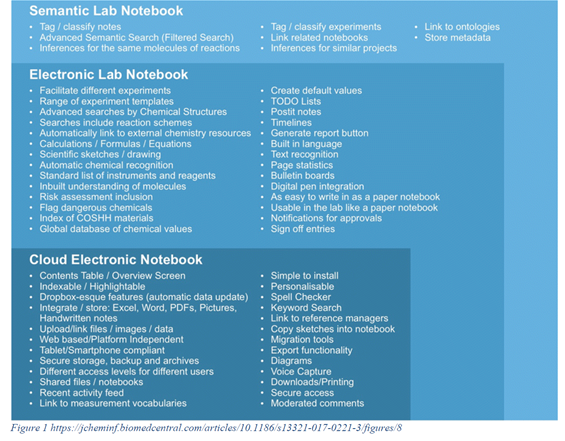 By harnessing the power of a Web/Cloud ELN combined with LIMS functionality, you can streamline your work and tap into limitless potential, increasing creativity, scientific accuracy, and the ability to collaborate with your peers.

To find out more about how Web/Cloud ELNs combined with a LIMS can help your lab, contact LabVantage today.